Medtrition strives to provide the most current and relevant industry knowledge to our customers as well as important product updates and introductions from our full line of medical foods and purees.   NewsRelease_Expedite_02-18-2022
Home › Blog › Nutritional Support for Stomatitis and Mucositis

Nutritional Support for Stomatitis and Mucositis

Malnutrition is a common place in the oncology setting. Side effects related to treatment are often to blame. Common side effects impacting a large portion of the oncology population are stomatitis and mucositis. Stomatitis is defined as an inflammation and ulceration of the lining of the mouth and mucositis is an inflammation or ulceration anywhere along the gastrointestinal tract.   These issues cause pain, discomfort, poor appetite and an overall poor tolerance to most foods. Often times intervention includes avoiding rough, tough an 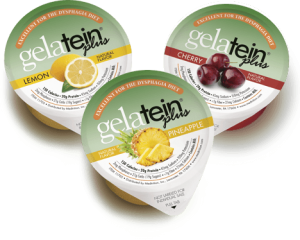 d spicy foods, concentrating on room temperature or cold foods, maintain adequate hydration and practicing good oral hygiene.
An avenue of support to consider would be Gelatein Plus. Gelatein Plus is low volume, a high calorie, high protein snack 150 calories and 20 grams of protein per 4 fl. oz. making it perfect for someone who doesn’t have much of an appetite. Gelatein Plus has a light, refreshing taste and because it is fat free it may also be better tolerated from a digestion standpoint. Gelatein Plus is a great alternative to traditional milk based supplements as it has almost twice the protein in half the space. Although Gelatein is best served cold, it can also be consumed at room temperature. The soft, smooth texture with variety of flavors makes it a perfect addition to your nutrition arsenal.
Karen Sudders, MS, LDN, RD,
Director of Nutritional Services, Medtrition, Inc.

For product updates, information and promotions

Any cookies that may not be particularly necessary for the website to function and is used specifically to collect user personal data via analytics, ads, other embedded contents are termed as non-necessary cookies. It is mandatory to procure user consent prior to running these cookies on your website.