Medtrition strives to provide the most current and relevant industry knowledge to our customers as well as important product updates and introductions from our full line of medical foods and purees.   NewsRelease_Expedite_02-18-2022
Home › Blog › Wound Healing requires adequate nutrition.

It is often ignored but optimal wound healing requires adequate nutrition.  Time and again it has been shown that nutritional intervention maintains gut integrity, decreases risk of poor healing of pressure ulcers and surgical wounds, modulates inflammation and prevents negative nitrogen balance.
Here is a great testimonial showing the efficacy of ArgiMent AT on wound healing on an oncology patient with diabetes:
A  64 year old man presented for an initial nutrition consultation regarding his newly diagnosed pancreatic cancer. He is a diabetic and overweight, 6’ 5”   250 lb., non-smoker.   He had recently been in the hospital with nausea,  dehydration and elevated blood sugars following his first cycle of chemotherapy. 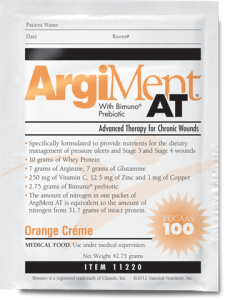 Insulin treatment was initiated in the hospital  and continued upon discharge.  Prior to leaving the hospital, he had developed bilateral lower leg cellulitis. He was prescribed antibiotics and  Zinc tablets twice a day.
At the time of his initial nutrition consultation his  appetite and intake had improved and his blood sugars were well controlled. He was taking the Zinc twice a day as prescribed by the physician.  He was very uncomfortable from his lower leg cellulitis, it was very painful and the skin was red and weepy.  There had not been any noticeable improvement in the 2 weeks since his discharge from the hospital.
After reviewing his nutrition intake and blood sugar records,  the clinical dietitian suggested and discussed a course of Argiment AT  with his physician. With physician approval, he took 1 packet Argiment AT BID for 2 weeks and discontinued the zinc tablets.
The followup nutrition consultation was 2 weeks later.   His bilateral leg cellulitis had completely cleared up.  The skin was no longer weepy, and the redness had subsided.  The patient and his physician were thrilled with the positive outcome.

For product updates, information and promotions

Any cookies that may not be particularly necessary for the website to function and is used specifically to collect user personal data via analytics, ads, other embedded contents are termed as non-necessary cookies. It is mandatory to procure user consent prior to running these cookies on your website.